This job has been problematic with it being so wet and then snowdrifts often in the way!
The old David Brown is not ideal for the job but since it does little else in the winter the machine can stay on for weeks.


It is quite a job mounting and un-mounting even though it fits on the links - some bigger machines are fixed under the tractor which aids stability. 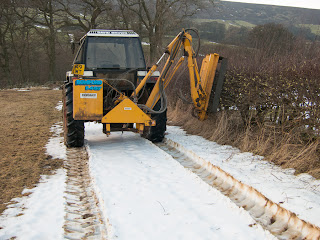 Posted by Westerdale at 19:29 No comments:

Must say there had been an element of worry as calving season approached with reports of problems due to Schmallenberg locally and major issues on some farms down south last year.
It is known to have been active through the area last summer but there is thought to be only a brief period during early pregnancy when calves can be affected, so in our case with a relatively spread out calving pattern it would seem unlikely that too many will be affected.

Anyway this first one was due on the 8th but being a limousin some lateness is to be expected.
I helped it out with the calving aid early afternoon and it was up and sucking within the hour.

Posted by Westerdale at 19:12 No comments:

Having just downloaded the windows live package to update moviemaker, I thought I would try the blog writing tool also.
Setting up seems fairly easy anyway but it will need a few experimental posts like this to decide if it is better than logging in to blogger.

Posted by Westerdale at 20:30 No comments:

After going into something of a slump through January they seem to be up a little this week but it is unclear if this is a proper trend due to the lower pound, or as some say a weather-delayed consignment from NZ!

The ones I took to Ruswarp Monday were 44kg and 46kg and made £54 and £58.
This is still down on 42kg ones sold December for £64 but a couple of weeks ago they would have barely made £50 by the sound of things.

Meanwhile store cattle are still in great demand.
Two plain looking Limousin steers which were twins who had been bucket fed (as their mother died) got to £850 at Malton last Friday.

Well after the weeks of Christmas followed by rather too much snow, managed to actually sell something today - took twin bullocks to Malton and had a word with K.A. about two elderly cows I have been babying in a box on their own - as they were going downhill roughing it in the main group.

The bullocks were really rather plain as they lost their mother at about two weeks old, and were bucket fed - always the smaller ones that got pushed out as they got bigger.
They still made £850 which was more than a couple of hundred over my worst fear.
Then  K.A. said he could come pick the cows up today which was unexpected as I was thinking maybe next week.
However with a bit of snow expected both tomorrow and mid-week it was good to get them away, as one in particular was looking rather frail and barely holding her own.

So when I got home it was a quick scrabble around to find the passports and put a replacement big tag in one of them.
They loaded quite well and will now be stuffing their faces at Malton for a couple of days.
Posted by Westerdale at 17:35 No comments: